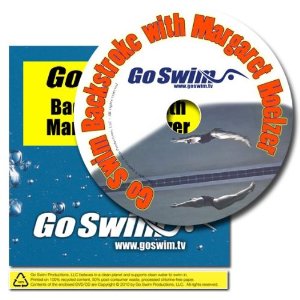 In GO SWIM BACKSTROKE WITH MARGARET HOELZER, Olympic Medalist and American record holder Margaret Hoelzer shares the key focus points that she uses to develop her awesome backstroke technique. Margaret's six focus points work for every level of swimmer, novice to elite, and you don't have to learn drills or change your normal workout routine in order to incorporate them into your stroke. You can start to apply them immediately, the next time you go to the pool. The extraordinary swimming footage of Margaret, combined with clear, step-by-step instruction, will help take your backstroke to the next level.

- Discover Margaret's 6 key focus points for fast backstroke.
- Learn WHY each key point is important, and HOW each one will help you go faster.
- Each focus point is illustrated from multiple angles side, head-on, below, and rear, and from above and below the surface.
- Slow-motion and freeze-frame footage allows you to zoom in on key moves and really SEE how to do them.

MARGARET HOELZER swam in her first meet at age 5. Since then, she has been a member of the National Junior Team as well as 5 National "A" Teams. She has won 6 NCAA championships, 2 national championships, and 3 individual world championships. Margaret has been a member of two US Olympic Teams (2004 and 2008). In 2008 she won Olympic Trials with a world record in the 200m Backstroke, and went on to win a silver medal in that event in Beijing, as well as a bronze medal in the 100m Backstroke and silver in the 400m Medley Relay. Through clinics and appearances, Margaret has won fans all over the world, and is adept at teaching swimmers of all ages and abilities. She is the national spokesperson for the National Children's Advocacy Center, and has received the "Voice of Courage" award from the Darkness to Light organization.

GO SWIM BACKSTROKE WITH MARGARET HOELZER was written, filmed, and produced by the team of GLENN MILLS, a member of the 1980 Olympic Swim Team, and BARBARA HUMMEL, veteran of two Olympic Trials and currently a coach and World Top-Ten Masters swimmer